I’ve been watching a card weaving Facebook page and several people have asked about how to do the Ram’s Horn pattern.  It’s not a beginner’s pattern, for sure, but with an understanding of how the cards are set up and turning patterns of the cards, you, too, should be able to produce a lovely woven Ram’s Horn band.  Sounds easy enough, right?  Don’t worry–go step by step, and you’ll have this one by the horns!

Now, it should be noted, for those who are big into the recreationist groups like the SCA, this is not a period piece.  Historically, the only mention I can find is from a web site that reads:  “The Ram’s Horns pattern popularlized by Crockett’s “Card Weaving” book comes from the 20th century Anatolian (Turkish) belts and it has not equivalent in archeological finds.” http://weavedmagic.deviantart.com/journal/Origins-of-most-popular-tablet-weaving-patterns-394709084

So let’s get to the full color demonstration of this pattern!  READY?

If you’re not sure if you’re going to like it, or if you suspect you might get frustrated from trying and pitch it across the room, you may want to try a short piece first. Don’t warp up the loomzilla for this first project.  When I first tried this pattern, I did one-yard lengths for each thread, just to test it out.  I ended up getting about a foot done before I knew I needed to do a larger piece!

When choosing the thread, you will need a light color, a medium color, and a dark color.  High contrast is important in this pattern!

You will warp it up with the #1 card on the left; #22 card on the right, reading the pattern just like reading a book.  The next thing to note is that, for this pattern, you should have the top surface of the cards facing *left*.  If you have the cards facing right, the pattern will show up on the bottom side of the weaving.  Also, and the pattern (above) has the rows lettered backwards–D, C, B, A.  (If they were lettered A, B, C, D, you would have to face your cards to the right–good tip to note for when you find future patterns!)

This is the pattern for the dreaded Ram’s Horn pattern.  Some people dread it, but it’s really not that bad!  I love this pattern and I’ve made a few pieces with this pattern and while it’s not from the Medieval period (for those SCA recreationists out there), it sure looks great and the technique of turning the cards is all the same from ancient times.

First, a note.  I mark my cards.  In this set, I’ve colored the AD side blue, and the BC side pink.  This is the way I can tell when I’m back in the home position.

Just a refresher:  Each column in the pattern is marked with S or Z.  Some patterns will be marked with \ for S or / for Z, but since this font doesn’t have a significant slant, it can look a bit more confusing, so I’ve used the letters instead.  Many new weavers get confused about how to do S and Z threading.  This is one of the best diagrams I’ve found to remind yourself how the threads go through the cards. 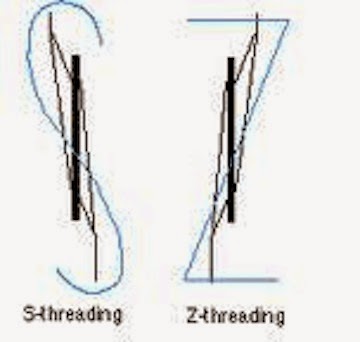 You’re looking at each card from its side–the S threading has the yarn coming through the front of the card towards you; the Z threading has the yarn coming through the back of the card towards you.
Now you’ve got the pattern, the threads, the cards, and a refresher on S and Z threading.  Go ahead and thread up your loom…I’ll wait.  (I often put in a movie that I’ve seen a dozen times so I have something to listen to while I work.)

Now the cards will turn in the direction that they have been placed.  The cards closest to you will turn towards you (BACK); the ones further away will turn away (FORWARD).  Turn all cards a quarter-turn and throw the shuttle.  Turn another quarter-turn and all the cards will have the red side facing up.  Make two more quarter-turns, throwing the shuttle between, until the cards are back to the home position again.
Once at the home position, all the cards will turn together for four quarter-turns.  Since the first two cards were turning back in the last round, *all* the cards will turn back in this round.  Turn back for four quarter-turns, throwing the shuttle between each quarter-turn.
Then, split the deck again, same as before.  Repeat and you will see the ram’s horns appear!  Yes, you will see a dimple after each repeat.  Don’t panic!  When you switch directions in turning the cards, a tiny hole can appear in the middle and the weft shows through.  If you don’t want the dimple, you can change your weft thread to match the middle, but then it’ll show on the border, unless you also change the border color to match.

So, in brief, here’s the turning directions:
1.  Turn all the cards four quarter-turns BACK, throwing the shuttle between each quarter turn.  End in the home position.

Repeat steps one and two to your heart’s content!

Some people have tried (with varying success) to use fishing spinners that will untwist the threads as you go.  This is great if you’re doing backstrap weaving or have a long span that your warp is spread out, but I use this inkle loom and the twist builds up between the cards and the first or second peg and stops there.  You *can* move the twist down the entire length, around each of the pegs to get the spinners to untwist, but it’s time-consuming and can be frustrating.

The other thing you can do is carefully untie the threads that are twisted, untwist them, and re-tie…this is also time-consuming and can be frustrating.  I’ve done it…a couple times.

But the other option that works well with this pattern is to simply change directions to untwist every few repeats.  You could do every couple of horns, six horns, eight horns…whatever you desire.  The question is, at what point in the pattern do you change directions?

In this pattern you were repeating steps 1 and 2, now you have to take steps 3 and 4 to go the opposite direction!

You will repeat this pair of steps until the twist builds up in the opposite direction.  Then you’ll change directions again, finishing step 4, then going back to step 1 and 2.

Now you can weave your Ram’s Horns and show your Advanced Card Weaving skills to all your friends!